Watching Tesla the past few months sure looks familiar.  The meteoric rise in the stock brings back memories of the dot-com bubble.  For those of you too young or too old to remember, around the turn of the millennium everyone was gaga for technology.  We aggressively pursued infant internet companies, chasing anything that ended in “.com” while ignoring the fact that most of the little darlings had weak business models and even weaker cash positions.

Remember such titans of industry as Pets.com, theGlobe.com, and Flooz.com?

Of course, not all of the dot-com companies were a boom to bust flameout.  Amazon and eBay got their start during the craze.

But it was the dramatic rise and fall of so many of these young darlings of Wall Street that I best remember.  It was common to see stocks go from $2 to $150 in months, for really no good reason.  And the rise in Tesla the past few months seems eerily similar.

Make no mistake.  The company puts out a cutting-edge vehicle, and appears to be getting its financial act together, despite the volatile behavior of its founder and mastermind.  But the price of the stock is running over six times SALES.  Not earnings.  SALES.  This makes the company worth more than GM and Ford- combined, even though it manufactures a tiny fraction of the number of vehicles of the industry titans. 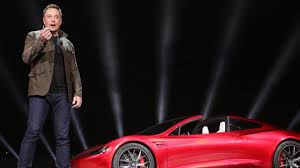 So unless they’ve cured cancer or found the lost city of Atlantis, there’s no way Tesla is worth anything close to its current bid price.  Now this is no recommendation to run out and sell Tesla short.  There is a bloody trail of traders who’ve been trying that.  I’m simply saying that cooler heads will eventually prevail, and fundamentals will once again matter one day.